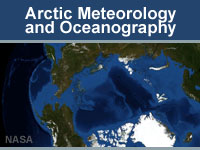 Diminishing sea ice has opened the Arctic to navigation and operations like never before. Forecasters are increasingly predicting weather in support of those operations. This module is intended to provide forecasters with a brief introduction to the Arctic, including its geography, climatology, and the forecast problems they are likely to encounter. The module follows a U.S. Coast Guard Cutter on a voyage from Dutch Harbor, in the Aleutian Islands, to Barrow, on the north coast of Alaska. Various topics are addressed along the way in a series of short, stand-alone lessons.
Have an account? Sign In to write a review.