A Forecaster's Overview of the Northwest Pacific 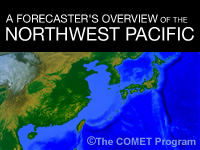 This module provides an introduction to the northwest Pacific for weather forecasters. It touches on major aspects of the geography, oceanography, and climatology. Geography looks at plate tectonics, topography, and human population. Oceanography examines ocean currents, coastal tidal ranges, and sea ice distribution. Climatology briefly discusses jets streams, distribution of synoptic features, storm tracks of tropical and extratropical cyclones, the fronts, and sensible weather associated with the Northeast and Southwest Monsoons.
Have an account? Sign In to write a review.