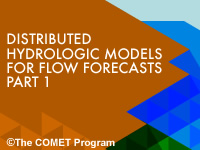 Describe distributed hydrologic models (DHMs) and how they work