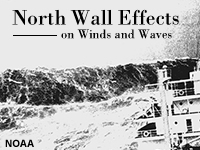 North Wall events refer to high wind and wave events that occur along the north edge of warm, fast, western boundary currents. These events occur along the Gulf Stream off the mid-Atlantic states of the U.S. and along the Kuroshio Current near Japan and Taiwan. This module explores the relationships between atmospheric stability, winds, waves, and ocean currents during North Wall events. Using three different case studies, we examine the relevant aspects of several topics, including the synoptic setting, ocean currents, evolution of the marine boundary layer, growth of ocean waves, and potential wave-current interactions.
Have an account? Sign In to write a review.