Winds in the Marine Boundary Layer: A Forecaster's Guide, 2018 Update 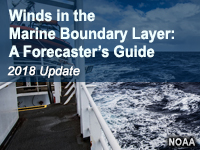 March 2012: This module has been updated to provide greater flexibility in navigation and linking to specific content. In addition, minor changes have been made to improve the clarity of the content and correct inconsistencies. However, these changes do not affect the overall substance of the material taught.

September 2018: Updates include the addition of GOES-16 satellite imagery to help illustrate key marine boundary layer processes. Minor changes to address some outdated content were also completed and the module was reprogrammed in a current template not reliant on Flash technology.