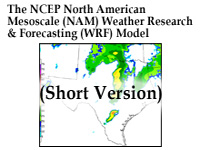 NCEP is replacing the NAM Eta model with a version of NAM WRF on June 20, 2006. COMET has created The NCEP NAM WRF Model (Short Version) Webcast to describe changes in the model and analysis system, highlighting how these changes impact the model forecast. (A full version of this Webcast is also available.) The new Gridpoint Statistical Interpolation (GSI) analysis introduced with this change will also be implemented in the Real-Time Mesoscale Analysis later in 2006 and in the GFS, RUC, and Hurricane-WRF models over the next two years. In addition to discussing the GSI, the Webcast covers the change in vertical coordinate and terrain, nonhydrostatic effects, a change in the precipitation type algorithm, and some background on the WRF concept and the previous operational uses of the NCEP Nonhydrostatic Mesoscale Model.
Have an account? Sign In to write a review.