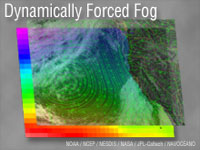 Fog frequently forms in response to dynamically forced changes in the boundary layer. This module examines dynamically forced fog in the coastal and marine environment, focusing on advection fog, steam fog, and west coast type fog. The focus of the module is on the boundary layer evolution of air parcels as they traverse trajectories over land and water. The module also examines mesoscale effects that impact the distribution of fog and low-level stratus over short distances. A general discussion of forecast products and methodologies concludes the module.
Have an account? Sign In to write a review.