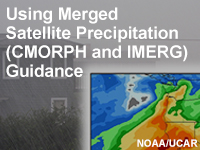 Two atmospheric river events that produced heavy precipitation and flooding in different locations within the United States are used to demonstrate some of the capabilities of the merged satellite precipitation products, CMORPH and IMERG-L. The CPC MORPHing Techniques (CMORPH) and the Integrated Multi-satellitE Retrievals from GPM (IMERG) rely on low-Earth orbiting microwave satellites and Geostationary Operational Environmental Satellites (GOES) to establish the shape, magnitude, and movement of precipitation areas. Satellite precipitation guidance from the merged products is presented and compared with Multi-Radar Multi-Sensor (MRMS) precipitation analyses to assess performance during the two cases.
Have an account? Sign In to write a review.