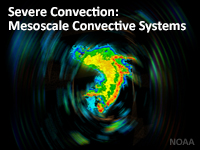 Mesoscale convective systems occur worldwide and year-round and are accompanied by the potential for severe weather and flooding. This lesson describes typical system evolution by examining squall line, bow echo, and MCC characteristics throughout their life cycles. This lesson has less emphasis on the physical processes controlling MCS structure and evolution than our previously released Mesoscale Convective Systems: Squall Lines and Bow Echoes lesson. Instead, this newly updated lesson includes more material on tropical squall lines, MCC's, and on NWP’s ability to predict convective systems. The lesson starts with a forecast scenario and concludes with a final exam. Rich graphics, audio narration, and frequent interactions enhance the learning experience.

September 2016: This lesson has been updated to conform to current HTML standards and brings the original content to a new, easier to navigate format. The title was changed, dropping the numeral from Severe Convection II.

July 2014: Due to its age, this lesson contains products generated from the Eta model, which is no longer in operational use. This primarily impacts the MCSs and NWP section. Additionally, while the information presented is largely still valid, it does not include new discoveries including MCSs initiated as elevated convection, not surface convection. Much of this work is covered in literature by Schumacher.