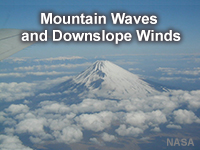 Mountain waves form above and downwind of topographic barriers and frequently pose a serious hazard to mountain aviation because of strong-to-extreme turbulence. This foundation module describes the features of mountain waves and explores the conditions under which they form. Like other foundation modules in the Mesoscale Primer, this module starts with a forecast scenario and concludes with a final exam. Rich graphics, audio narration, and frequent interactions enhance the presentation.

After completing this module, the learner should be able to do the following things.
With regard to the hazards, features, and climatology of mountain waves and downslope winds:

With regard to downslope winds:

With regard to the origin of mountain waves and downslope winds:

With regard to forecasting mountain waves and downslope winds:

July 2014: The concepts presented in this module are relevant even though they are demonstrated with older NWP models.