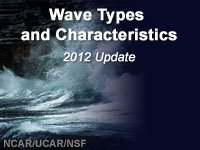 This is the first in a series of new marine meteorology modules based on COMET’s old laser disk and CD-ROM modules on marine meteorology. This module is an introduction to waves and their associated characteristics. Several types of waves are presented, from the common wind wave to the rare tsunami wave. The basic physical, mathematical, and statistical traits of waves are discussed, along with how they change once waves become swell. This material serves as a building block to subsequent modules on wave generation, propagation, and dispersion.
Have an account? Sign In to write a review.