Forecasters' Overview of the Mediterranean and Europe 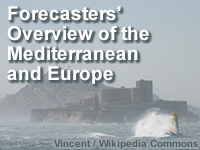 This module provides an introduction to the European continent and the Mediterranean and Black Sea areas for weather forecasters. It focuses on geography, climatology, oceanography, major aspects of the synoptic and mesoscale weather patterns, and hazards to aviation and maritime operations.
Have an account? Sign In to write a review.