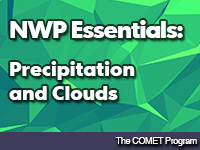 Both the processes of convection and of rainfall formation are typically subgrid scale, and require parameterisation. This lesson examines two types of precipitation parameterisation used by models:

The lesson also discusses how to identify when these parameterisations are not performing well and steps to address the issues that arise.

After completing the lesson, you will be able to: