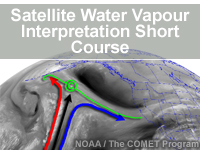 This self-paced distance learning course introduces the power of dynamical thinking. To apply this thinking to the real-time atmosphere is a challenge, even to seasoned atmospheric scientists. This short course is your first step toward dynamical reasoning using satellite water vapour imagery.

The learner will use WV imagery to:

Satellite imagery is a key stepping stone in making a full analysis of the three-dimensional atmosphere. When making forecasts based on those imagery, what is the framework for understanding the atmosphere? The answer is fluid dynamics.

Water vapour imagery brings the shallow-water model into plain sight. This short course helps you combine the water vapour channel with your understanding of fluid dynamics to bring a new point of view to your meteorological analysis. Jets, deformation zones, vorticity centers, and conveyor belts all play together in the shallow-water model that is our atmosphere, and this course will help you understand them and their interplay.

More MetEd lessons to help you expand your learning:

Other resources to explore: