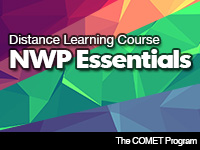 Numerical models are constantly changing. Learners need a solid understanding of the basic building blocks of model systems, such as dynamics, physics, and assimilation. This course will enable learners to adapt to future model changes and use model guidance intelligently when forecasting the weather. The lessons in this course were created in collaboration with the Australian Bureau of Meteorology and include Southern and Northern Hemisphere examples. In addition to Australian meteorologists, forecasters around the world will benefit from the availability of these materials.

The following topics are considered pre-requisites for this course:

The following list outlines some of the skills that the learners will be able to do after completing the five lessons in the course:

It is recommended that those new to weather forecasting go through the lessons in order. Those with some experience can go directly to the NWP topic of greatest interest to them.

To receive a course completion certificate, you must successfully complete all five lessons which will take about 7.5 hours.

What is a Course?

MetEd courses consist of a selection of lessons in a particular area of interest. When all lessons in a course have been completed, a printable course completion certificate is offered.

Access to our courses and lessons requires registration. To learn more about registering or to get help with common questions about our site, please visit our FAQs.