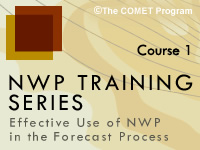 NWP Course 1, NWP Basics and Background, is the first course in the NWP training series, Effective Use of NWP in the Forecast Process. Course 1 includes lessons on how the forecast is affected by the basic building blocks of model systems, such as the dynamics, physics, and assimilation. Additional lessons introduce new tools, such as downscaling of NWP model data, bias correction, and ensemble systems. In the future, background material for emerging NWP tools will be placed here as well.

Upon completion of the Model Fundamentals part of this course, the student will explain how model forecasts are affected by:

The student will explain the fundamental assumptions of data assimilation, how observations are incorporated into a model analysis, and how a model analysis is affected by:

The student will be able to distinguish between random and systematic forecast errors and recognize advantages and limitations of statistical postprocessing, especially Model Output Statistics (MOS).

Upon completion of the Forecast Tools part of this course, the student will explain:

Every day, the operational forecaster faces decisions on the usefulness or even the validity of numerical weather prediction (NWP) output and the associated statistical guidance. Forecasters must also decide if time invested improving model data is worth the return on that investment. The philosophy of the NWP training series is to provide the scientific underpinnings for assessing and using NWP forecasts as part of the general forecast process. This training helps forecasters "open the black box of NWP" and become better users of NWP in an operational context, where the forecast may make the difference in the protect of lives and property.

Course 1: NWP Basics and Background. This course includes a series of lessons on the architecture of an NWP model system. Additional training materials introduce tools such as downscaling and bias correction of NWP model output. Background material for emerging NWP tools will be placed in Course 1 in the future.

Course 2: Using and Adding Value to NWP in the Forecast Process. These lessons will be accompanied by brief WES caselets to reinforce the operational application of key concepts. Although each lesson is self-contained, the set does represent a sequence, and thus should be taken in order. A final synthesizing WES case will be provided to integrate all course content into a forecast context.

Course 3: NWP in the Era of Digital Forecast Preparation. In this course we address how model data can be best used in the production of gridded forecast products. Topics include starting points for grid editing, evaluating model data in the Graphical Forecast Editor versus the D2D display, and applying the forecast funnel approach when making high-resolution forecast products.

A key aspect of the forecast that is not covered in the NWP Training Series is communication to the public and other end-users. Communicating forecast uncertainty, the risk and effects of high-impact events, or other sociological aspects of the forecast, while important, are outside the scope of this series.

What is a Course?

MetEd courses consist of a selection of lessons in a particular area of interest. When all lessons in a course have been completed, a printable course completion certificate is offered.

Access to our courses and lessons requires registration. To learn more about registering or to get help with common questions about our site, please visit our FAQs.